Driving On The Roads Around Lake Garda in Your Maserati

Touring Italy in a Maserati SUV

Sep, 12 — In one short stretch of road along the western edge of Lake Garda, you can get the full Italian driving experience – from climbing rocky hills to plunging towards the water, and dodging erratic local drivers and pedestrians in picturesque towns – the roads in this part of northern Italy can really put a car to the test.

Says Hannah Elliott of Bloomberg Pursuits’ after she’d taken the new Maserati Levante for a drive on a varied and scenic route along the coast of Lake Garda. You can get a good idea of her experience by watching the video above.

Over 100 Miles of Lake Garda Coastline Across Three Regions – Lombardy, Trentino and Veneto

Lake Garda has over 100 miles of coastline and a road, the Gardesana, which follows it all the way around. Circumnavigation of the lake will take you through the Province of Brescia in the Lombardy region, the Province of Trentino in Trentino Alto-Adige and the Province of Verona in the Veneto; meaning that you can have a fabulously diverse driving experience both with the landscape and the culture. You can stop in any of the lakeside towns to sample the local produce, take a café or gelato and experience the history, or turn away from the lake to discover hidden gems among the mountains, vineyards and olive groves.

Peschiera del Garda, in the Veronese south eastern corner of the lake, where river Mincio flows out and away to Mantova, is as good a place as any to start your journey. Driving through the historic centre of the town you will pass through parts of the medieval fortress, built during the reign of the Venetian Republic, when Peschiera was the most strategically important town on the lake. Head west out of town and you will very soon be passing into Lombardy and past Sirmione, a right turn at Colombare will take you down the 4km peninsula. Sirmione is the location of the first time-check on the famous Mille Miglia road race. You could park up for a while to reccy the moated island, one of the most visited parts of the lake. Besides uncountable ‘geletaria’, restauarants and shops you will also find a Scaglier castle and the ruins of a roman villa and thermal baths. Back in the car you could head away from the lake into the rolling morainic hills, to discover the Lugana vinyards and sleepy villages. Two landmarks that will be hard to miss are the town of Solferino and the San Martino Della Battaglia, both have towers to commemorate the bloody battle during the second war of independence that saw the birth of the Red Cross. Views from the tower at Solferino are some of the most spectacular you will see, on a clear day it is said you can even make out Venice.

Continuing west on the Gardesan from Simione you can glimpse the lake as you drive through Rivotella before arriving in Desenzano. Pop into the center to witness the romantic Porto Vecchio, then take the coast road out of town and pick up the Gardesana at Lido di Lonato. The views of the lake are varied and exhilharating as you drive north up the west coast to the Golfo di Salo’. There are numerous opportunities to leave the Gardesana and either, head inland to the rolling hills of the Valtenesi, an important wine region famous for it’s Groppello and Rebo, where you can visit ancient towns like Polpenazze and Puegnago del Garda. Or you could explore lakeside where you’d discover pretty ports like Moniga, Dusano and Portese, or visit the ‘Parco Archeologico Naturalistico’ at La Rocca di Manerba. From ‘La Rocca’ head around the Golfo di Manerba before cutting across the headland, through the olive groves and vinyards, to pick up the road around the Golfo di Salo. As you drive around the bay you can catch some fantastic views across to the historic center of Salo and Al Duomo.

Continue on to Gardone, one of Lake Garda’s most elegant resorts, the road is lined with palm trees and lush vegetation, the crystal waters of the lake sparkle between the grand villas and luxury hotels. Things really open up when you exit Gardone and drive around the bay into Toscolano Maderno. There’s a real cosmopolitan feel with cafes, bars and geletarias lining the lungolago; the glistening water seems like an outstretched arm away, with far reaching views across the lake and the iconic Lake Garda landmarks, Isola Del Garda and the Rock of Manerba clearly visible. The distinct peak of Pizzoccolo seems to slide right down into town, magnificent churches balance on rocky outcrops, the towering monte Baldo imposing itself from the eastern shore. 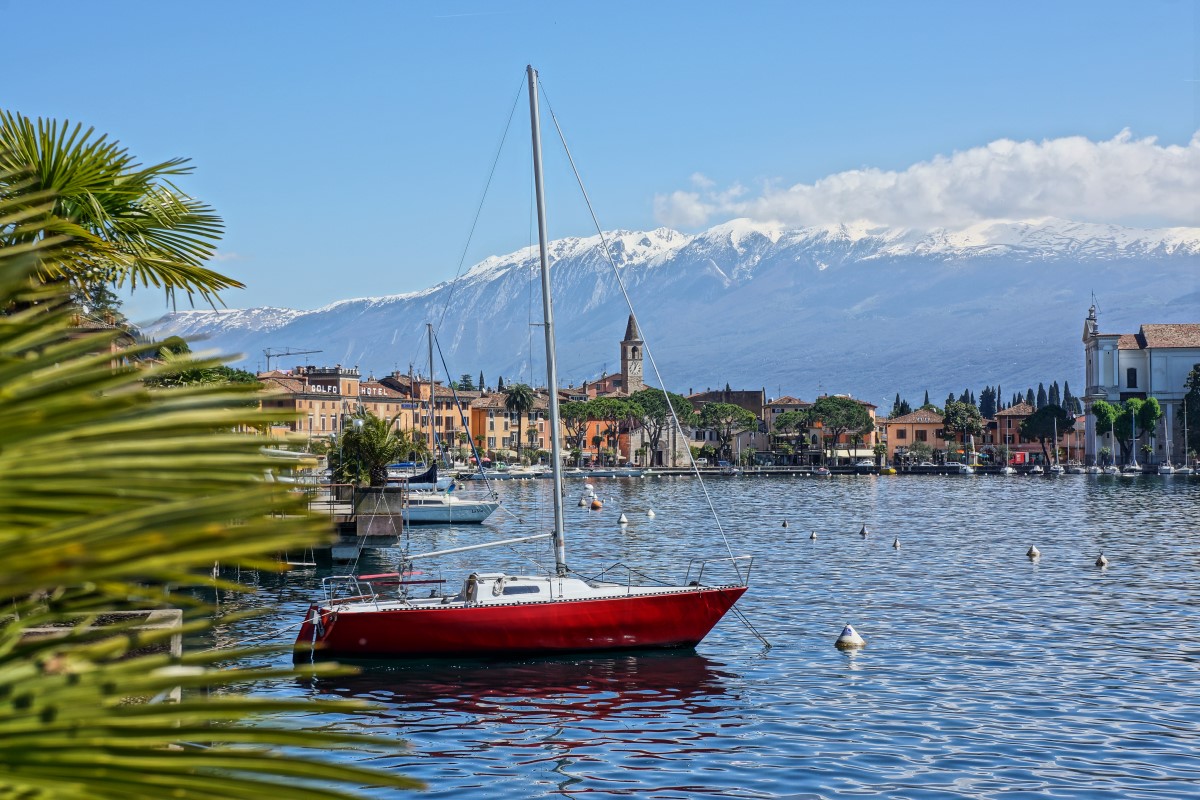 Drive Up into the Mountains Around Lake Garda

The road north from Toscolano, which takes you through Bogliaco and Gargnano up to Limone and Riva really does provide world class scenery. It’s the stretch of road that was used in the Quantum Of Solace James Bond film. Through tunnels and galleries the lake is always just down below, the views across the azzure blue water to Baldo and its foothills are truly spectacular. At Gargnano you could venture from the lake by taking the SP9 up to Navazzo, then continue through Parco Alto Garda Bresciano with its stunning scenery, dam and lakes, to the SP58 which takes you down Lago di Idro. Lago di Ledro is another detour you could make by taking the ss240 once you reach Riva.

If you prefer to stick to Lake Garda but want to experience something really special then take the Via Benaco (SP38) up to Tremosine. As the video shows you, the road hugs the mountain and takes you up, up, up so you can see Lake Garda from a whole new perspective, before literally cutting inland through the rock and squeezing between crevices before reaching the Val di Brasa and into Tremosine.

When you arrive at Riva, the town at the head of the lake, you will have entered the Trentino region from where you can access the Dolomites. Venture off up to UNESCO World Heritage site at Val di Fiemme, famous for it’s outstanding natural beauty and its traditional local produce such as the smoked ham known as Speck. You could stop for lunch at one of the most famous producers, Tito Speck in Daiano, their shop and restaurant is housed in a Marso, the typical type building of the region.

If you choose not to head into the Dolomites and to stay on the Gardesana you will soon start to head south down the east coast. After Torbole you will soon leave Trentino and enter the Veneto region. On the road south the scenery continues to impress, hugging the shoreline with brief interruptions as you pass through the towns; first Malcesine, famous for it’s Scaglier Castle, from where you can catch the cable car to the top of Monte Baldo, further south through Brenzone, then on to Torri and another Scalier castle. Monte Baldo towers above you on for more than 40km until you reach Punta San Viglio

Now bare east around the Bay of Garda before reaching the town of the same name, Baldo is behind you giving way to the Caprino plains. Head away from the lake and again you can explore a landscape that reveals some spectacular natural treasures such as the amphitheatre at Rivoli Veronese, or equally spectacular man made ones like the Sanctuary of Madonna della Corona. Heading south on the Gardesana form Garda you will come next to Bardolino, probably the most know of Lake Garda’s towns thanks to the wine of the same name. Then driving further south you will arrive at Lazise, last but not least, yet another Scaglier castle, another pretty port, this one dating back to the 10th century.

The remaining 10km stretch back to the starting point at Peschiera is probably the only unremarkable stretch of road on the entire trip. Access and even sight of the lake is denied due to it being the location of the famous theme parks, Gardaland and Caneva world, still I think you will have seen enough.

Don’t forget that the A4 runs just south of the lake and having a car on your holiday gives you the possibility of driving to many historic towns such as Milan, Bergamo, Mantova, Verona, Padova and of course Venice.

I wouldn’t recommend circumnavigating the lake during the high season, not in one hit at least. And avoid the Gardesana if you can, at weekends during the mid season. But there’s no reason why you shouldn’t explore the terrain away from the lake at any time of the year. Even if the roads are clear, I wouldn’t advise driving like James Bond. It would be nice to do the trip in a Maserati, but unless you are lucky enough to have your own, I doubt if you’d get one through a hire company.

We’ve teamed up with rentalcars.com who guarantee best prices from the leading suppliers. Use the search box below to find out what cars are available and book your ride so you can start looking forward to driving around Lake Garda.

Check out our Places To Visit In Lake Garda page for more places to stop off at on your way round.

Not picking up from Verona, simply replace Verona with your preferred pick up point.